College roommates Noah and Jake take the at-home HIV test LIVE over the internet, but are they prepared for the results? 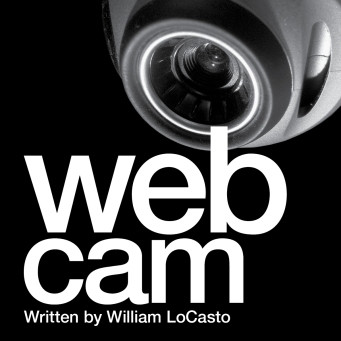 Webcam explores the emotional and psychological intentions behind wanting to be seen versus wanting to hide and never be seen again. Written by William LoCasto, and directed with a light touch by Ellen Rosenberg, the play, presented by the Manhattan Repertory Theater [Spring One Act Play Competition 2016], features an excellent acting duo led by the comic yet strident actor Ben Chamravi and the innocent and guarded Liam Bobersky.

The play takes place in Jake and Noah’s dorm room, in current day central Manhattan. The set consisted of only a table and a chair, set center stage, as Jake encircled Noah and his webcam throughout the play. The stage was wonderfully lit and because of the strong acting, direction and clever dialogue, the actors and their minimal props were all we needed to enjoy and interpret this well produced serio-comic play.

The simple staging also gave emphasis to this unique push and pull relationship between these two young men and the overall tone of the play. The story as well as Jake’s continuous pretentious commentary made me identify that there was a specific reason behind Jake’s intentions to be seen as this cool and confident man, while Noah is made out by Jake to be this hopeless, “more than likely” to be positive “fag”, when in reality Jake is actually the one who is hopeless and insecure. 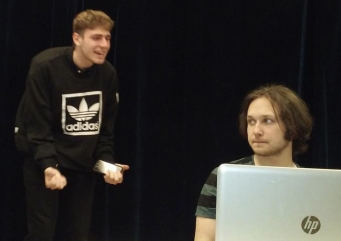 One of the most intense and frightening scenes we all witnessed was when Noah unexpectedly challenged Jake, claiming that all of this was Jake’s idea, to which Jake replied, “Oh, so what do you think then? That I want to do this just as much as you do?”, and as Noah finishes muttering “well maybe a little more actually”, Jake violently pushes him, and restores the balance of their relationship by putting Noah in his place, menacingly labeling him as “a little fag…and I’m not kidding this time either, you are a little fag.”

Jake’s finest moment may be a silent one, as in the final several minutes of the performance he and Noah share an uneasy moment where Jake stares at Noah trying to make sense of his current situation. They stand still and as Jake realizes Noah’s reaction is genuine, he panics and attacks Noah, helplessly pushing him and screaming at him to turn the webcam off. But what I most connected to was Jake finally realizing the truth of his situation and his existence; that he truly throws his insecurities onto Noah; that he truly isn’t a macho womanizer, that he is truly positive and that he is truly a human being.