Two young gay men, an anonymous voice, and a lot of questions about sex in New York City.

What happens when two gay men are alone with their own thoughts? Or rather are isolated from each other and everyone else to ponder and respond to questions about gay life in twenty first century New York City from a booming, probing, Oz-like voice?

William LoCasto’s new play, NY/XY, which premiered at the Beyond the Pale Arts Festival at Stage Left Studio in July, was a word-of-mouth sensation precisely because the characters Michael and Danny represent very different points on the spectrum of gay life lived today. Or do they?

In this not-so-post-gay day of the fight for marriage equality, the groundswell of radical queerness, of the changing nature of dating and mating rituals, of gay men having both safer sex and bare backing, of clubbing and anonymous sex riding alongside dinner and a movie as ways to meet men and find sexual gratification, just what the hell is the “norm” of gay male existence circa 2009? And, how does that norm—or lack thereof—manifest?

NY/XY highlights the unique voices of Michael (Brandon Bernard, pictured below, left) and Danny (Leicester Landon, pictured below, right) , two young gay men on a never-ending quest for love, sex and everything in between. Set in current day New York City, NY/XY is in fact timeless: It could be 1950 or 2025 and these two men would still be working out the same issues of chasing sex, finding love, embracing intimacy, and coming to a place of self-acceptance. 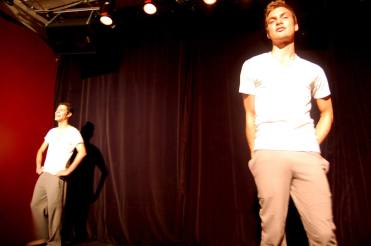 Martin Denton of nytheater.com put NY/XY in perspective very succinctly in his July 16th review stating, “LoCasto takes us to a surprisingly pertinent place, as we contemplate the kind of balance that a melding of Michael and Danny’s attitudes can yield—and we remember that being gay isn’t just about having sex or winning the right to legally wed. It’s a useful reminder in this current politicized time.” (Click HERE to read Martin Denton’s full review.)

While the play is not overtly political, the intense feelings and emotional response it evokes evidences just how tenuous is our grasp on ourselves and our lives whether we are gay or not. NY/XY is about universal themes with relatable characters who do not necessarily live in a particular time or place. New York City is indeed the backdrop and gay men are the players, but watching Michael and Danny transports the audience to their own milieu: male or female, gay, straight or anywhere and everywhere  on the sex or gender spectrum.